Of our Golden Girl, Miss Daisy... 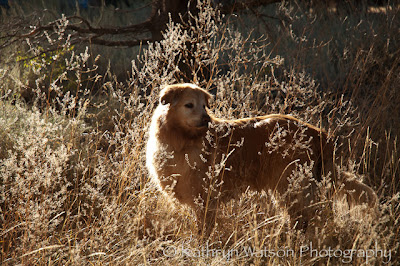 "If I have any beliefs about immortality,
it is that certain dogs I have known will go to heaven,
and very very few persons."
James Thurber

Miss Daisy came to live with us on December 8, 2002.  She was a rescue dog, so we don't know her real age, but thought she was around 5 when we got her.   When we brought her home, Dan took her in the backyard with him while he read his paper and smoked his cigar.  She walked around, sniffed a bit here and there, then decided she was home and laid down next to his chair.
This was there routine every weekend until we moved to Mammoth.... 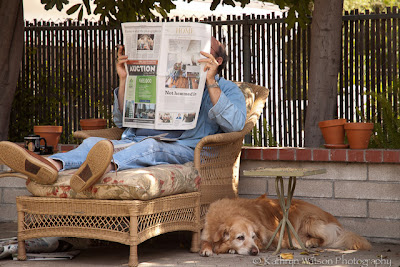 The following day, Dan went to work and Daisy and I stayed home.  I needed to run some errands so I put her outside and took off.  When I got home, Daisy was not in the yard.  The gate was open, and she was gone.  I walked the neighborhood calling her name, and asking neighbors and workers if they'd seen a Golden Retriever...several times I was told..."oh...there was one about 30 minutes ago running that way..."  I looked and looked and couldn't find her.  I went home and called Dan...he came home early and on the way stopped at the Pasadena Humane Society to see if she was there, watched for any sign of her having been hurt or killed on the main boulevard near our home, came home and he and I went searching again.
It happened to be my birthday that day and we had plans to go to dinner.  Needless to say, we were depressed and not particularly interested in going out...Dan was at the computer and asked me to look at whatever it was he was looking at.  As I was standing next to him he said "did you hear that?"  to which I replied "no I didn't".    Dan said he thought he heard a bark.  We went to the front door, opened it, and there she was...sitting on the front porch, wiggling...excited to be home...she walked right in and never left again.  I guess she checked out the neighborhood and figured it was a good place and she'd like to stay. 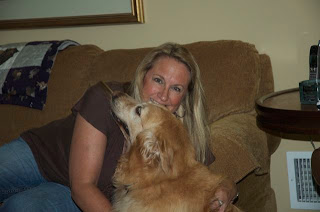 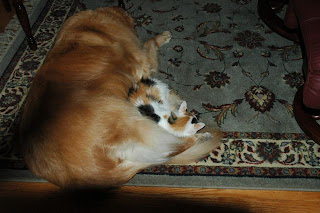 Shortly after we got our Calico Kitty Sadie...she discovered that Daisy was just a big fluffy pillow... 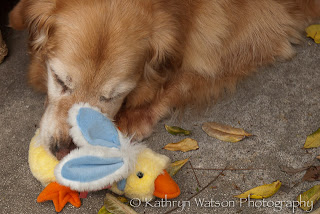 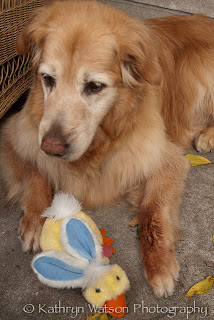 Daisy helping me with my Easter Duck story... 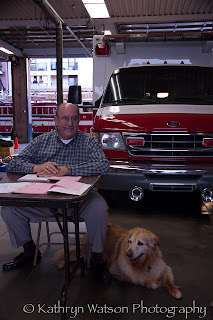 Miss Daisy was very philanthropic and helped out at the pet clinic in
South Pasadena... 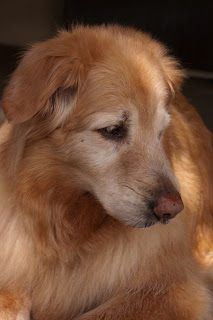 We knew when we moved up here to Mammoth that this would be a one way move for her.  We figure that she was somewhere between 13 and 14 when we moved here and she was beginning to wind down. 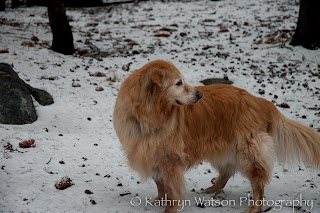 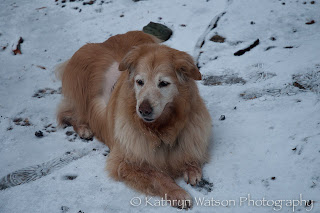 In November, we thought that we were going to lose her.  We took her to the vet and she had exploratory surgery.  The doctor was hoping that she had a tumor on her spleen as goldens often do, but instead, he found cancer in her liver.   He closed her back up and advised us to take her home to say our good byes...he anticipated that she had anywhere from a few days, to a couple of months. 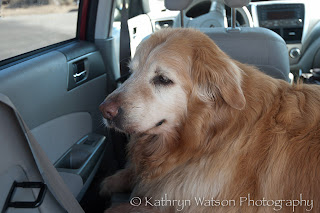 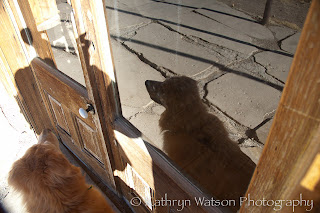 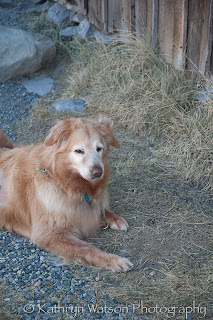 "Dogs are not our whole life, but they make our lives whole."
Roger Caras 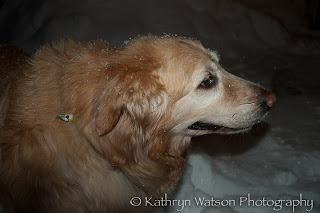 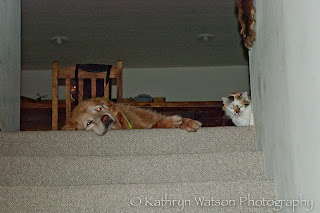 Daisy's favorite spot in the late afternoon...
waiting at the top of the stairs for her Pop to come home... 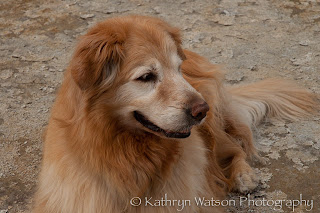 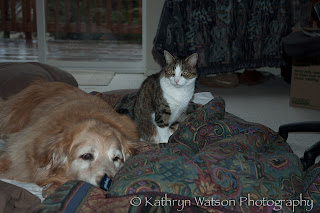 "If you can look at a dog and not feel vicarious excitement and affection,
you must be a cat."
Author Unknown 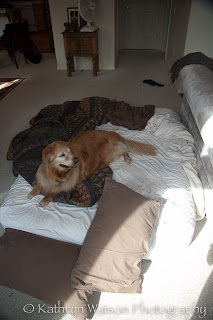 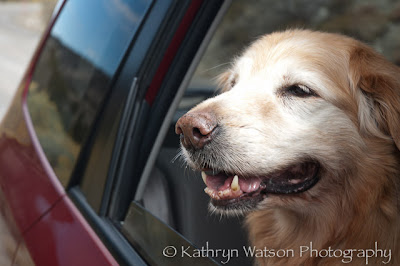 Miss Daisy blessed us with more time than the doctor thought.
As Dan's friend Dennis Bevan says at these times...Miss Daisy made her journey to Montana
March 16, 2011.
Every extra day she was with us was a gift.
Daisy will be sorely missed...
Thank you to Dr. Talbot and the wonderful staff at Bishop Veterinary Hospital for taking such great care of Miss Daisy during this time of her life.
Posted by TheChieftess at 12:03 AM